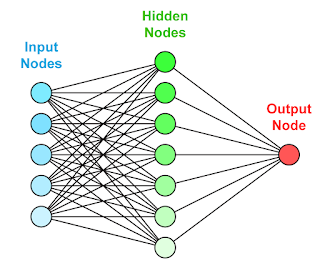 The intent of this article is not to tell you everything you wanted to know about artificial neural networks (ANN) and were afraid to ask. For that you’ll have to ask someone else. Here I only intend to tell you how you might use R to implement an ANN model. One thing I will say is that I rarely use an ANN. I have found them to work best in an ensemble model (using averaging) with logistics regression models.

neuralnet depends on two other packages: grid and MASS (Venables and Ripley, 2002). It is used is primarily with functions dealing with regression analyses like linear models (lm) and general linear models (glm). As essential arguments, we must specify a formula in terms of response variables ~ sum of covariates and a data set containing covariates and response variables. Default values are defined for all other parameters (see next subsection). We use the data set infert that is provided by the package datasets to illustrate its application. This data set contains data of a case-control study that investigated infertility after spontaneous and induced abortion (Trichopoulos et al., 1976). The data set consists of 248 observations, 83 women, who were infertile (cases), and 165 women, who were not infertile (controls).  It includes amongst others the variables age, parity, induced, and spontaneous. The variables induced and spontaneous denote the number of prior induced and spontaneous abortions, respectively.  Both variables take possible values 0, 1, and 2 relating to 0, 1, and 2 or more prior abortions. The age in years is given by the variable age and the number of births by parity.

The function neuralnet, used for training a neural network, provides the opportunity to define the required number of hidden layers and hidden neurons according to the needed complexity.  The complexity of the calculated function increases with the addition of hidden layers or hidden neurons. The default value is one hidden layer with one hidden neuron. The most important arguments of the function are the following:
The usage of neuralnet is described by modeling the relationship between the case-control status (case) as response variable and the four covariates age, parity, induced and spontaneous. Since the response variable is binary, we could chose the logistic function (default) as the activation function and (err.fct=”ce”) as the error function as cross-entropy.  Additionally, we should state the item linear.output as FALSE to ensure that the output is mapped by the activation function to the interval [0, 1]. The number of hidden neurons should be determined in relation to the needed complexity. A neural network with, for example, two hidden neurons is trained by the following statements:

We save basic information about the training process and the trained neural network in nn.  This includes all information that has to be known to reproduce the results as for instance the starting weights. Important values are the following:
A summary of the main results is provided by nn$result.matrix:

The training  process needed 5254 steps until  all absolute partial  derivatives  of  the  error  function were smaller than 0.01 (the default threshold).  The estimated weights range from −5.14 to 5.59. For instance, the intercepts of the first hidden layer are 5.59 and 1.06 and the four  weights leading to the first hidden neuron are estimated as −0.12, 1.77, −2.20, and −3.37  for the covariates age,  parity,  induced and spontaneous, respectively. If the error function is equal to the negative log-likelihood function, the error refers to the likelihood as is used for example to calculate Akaike’s Information Criterion (AIC).
We save the given data in nn$covariate and nn$response as well as in nn$data for the whole data set inclusive non-used variables. The output of the neural network, i.e. the fitted values o(x), is provided by nn$net.result:

In this case, the object nn$net.result is a list consisting of only one element relating to one calculated replication. If more than one replication were calculated, we would save the each of the outputs in a separate list element. This approach is the same for all values that change with replication apart from net.result that is saved as matrix with one column for each replication.
To compare the results, neural networks are trained with the same parameter setting as above using neuralnet with algorithm=”backprop” and the package nnet.

nn.bp and nn.nnet show equal results. Both training processes last only a very few iteration steps and the error is approximately 158. Thus, in this little comparison, the model fit is less satisfying than that achieved by resilient backpropagation.
neuralnet includes the calculation of generalized weights as introduced by Intrator and Intrator (2001). The generalized weight w̃i is defined as the contribution of the ith covariate to the log-odds:
The generalized weight expresses the effect of each covariate xi and thus has an analogous interpretation as the ith regression parameter in regression models. However, the generalized weight depends on all other covariates. Its distribution indicates whether the effect of the covariate is linear since a small variance suggests a linear effect (Intrator and Intrator, 2001). They are saved in nn$generalized.weights and are given in the following format (rounded values)

The columns refer to the four covariates age (j =1), parity (j = 2), induced (j = 3), and spontaneous(j = 4) and a generalized weight is given for each observation even though they are equal for each covariate combination.
Visualizing the results
The results of the training process can be visualized by two different plots. First, the trained neural network can simply be plotted by

The resulting plot is given in Figure 1.

Figure 1:  Plot of a trained neural network including trained synaptic weights and basic information about the training process.
It reflects the structure of the trained neural network, i.e. the network topology.  The plot includes by default the trained synaptic weights, all intercepts as well as basic information about the training process like the overall error and the number of steps needed to converge. Especially for larger neural networks, the size of the plot and that of each neuron can be determined using the parameters dimension and radius, respectively.
The second possibility to visualize the results is to plot generalized weights.  gwplot uses the calculated generalized weights provided by nn$generalized.weights and can be used by the following statements:

The corresponding plot is shown in Figure 2.

This means that the predicted probability of being a case given the mentioned covariate combinations, i.e. o(x), is increasing in this example with the number of prior abortions.

The weights of a neural network follow a multivariate normal distribution if the network is identified (White, 1989). A neural network is identified if it does not include irrelevant neurons, neither in the input layer nor in the hidden layers. An irrelevant neuron in the input layer can be, for instance, a covariate that has no effect or that is a linear combination of other included covariates.  If this restriction is fulfilled and if the error function equals the negative log-likelihood, a confidence interval can be calculated for each weight.  The neuralnet package provides a function to calculate these confidence intervals regardless of whether all restrictions are fulfilled. Therefore, we have to be careful interpreting the results.
Since the covariate age has no effect on the outcome and the related neuron is thus irrelevant, a new neural network  (nn.new),  which has only the three input variables parity,  induced,  and spontaneous, has to  be  trained  to  demonstrate  the  usage of confidence.interval. Let us assume that all restrictions are now fulfilled, i.e. neither the three input variables nor the two hidden neurons are irrelevant. Confidence intervals can then be calculated with the function confidence.interval:

This paper gave a brief introduction to multilayer perceptrons and supervised learning algorithms.  It introduced the package neuralnet that can be applied when modeling functional relationships between covariates and response variables. neuralnet contains a very flexible function that trains multilayer perceptrons to a given data set in the context of regression analyses. It is a very flexible package since most parameters can be easily adapted. For example, the activation function and the error function can be arbitrarily chosen and can be defined by the usual definition of functions in R.

Authored by:Jeffrey Strickland, Ph.D.
Jeffrey Strickland, Ph.D., is the Author of Predictive Analytics Using R and a Senior Analytics Scientist with Clarity Solution Group. He has performed predictive modeling, simulation and analysis for the Department of Defense, NASA, the Missile Defense Agency, and the Financial and Insurance Industries for over 20 years. Jeff is a Certified Modeling and Simulation professional (CMSP) and an Associate Systems Engineering Professional (ASEP). He has published nearly 200 blogs on LinkedIn, is also a frequently invited guest speaker and the author of 20 books including:
Connect with Jeffrey StricklandContact Jeffrey Strickland

Popular posts from this blog

January 10, 2018
Time Series Analysis using iPython In this example, we will examine ARMA and ARIMA models with Python using the Statsmodels package. This package can be downloaded at  http://statsmodels.sourceforge.net/stable/index.html . Autogressive Moving-Average Processes (ARMA) and Auto-Regressive Integrated Moving Average (ARIMA) can be called from the tsa (Time Series) module from the Statamodels package. Note: I am not as expert in time-series analysis as I am in other areas of Analytics, so if you find errors I would be happy to know about them and correct them. Introduction ARIMA models are, in theory, the most general class of models for forecasting a time series, which can be made to be “stationary” by differencing (if necessary), perhaps in conjunction with nonlinear transformations such as logging or deflating (if necessary). A random variable that is a time series is stationary if its statistical properties are all constant over time. A stationary series has no trend
11 comments
Read more

Where Did All The Thinking Go?

January 09, 2018
Where Did All The Thinking Go?   “Thinking is the hardest work there is, which is probably the reason so few engage in it.” ― Henry Ford What Do We Really Want? We live in a fast-food society, at least in the USA. We want what we want, now! We prefer not to work too hard for it, if we work at all, and many of us have a sense of entitlement. We believe all of us should go to college and get our degree, but not much effort should be expended in doing so. After all, we have lots of cheeseburgers to munch on and many parties to attend. “Five percent of the people think; ten percent of the people think they think; and the other eighty-five percent would rather die than think.” ― Thomas A. Edison When I was teaching, even at the United States Military Academy, I ran into this attitude often. Students wanted to do the minimum amount of work to get by with a passing grade. In contrast were the non-traditional students taking evening classes after working a fulltime job dur
7 comments
Read more